2022 was the third year in which the Award Ceremony took place online. At the same time, however, we were able to organise gatherings in each country for SozialMarie winners.

Social innovation thrives on the exchange of ideas. This is why the SozialMarie Gala with 300 international guests continues to to take place every year: it’s aim is to strengthen the network of social projects and to bring successful social innovation closer to the public. 2022 was the third year in which the Award Ceremony took place online. At the same time, however, we were able to organise gatherings in each country for SozialMarie winners.

The Hungarian SozialMarie winners had so much to share at a sunny afternoon gathering in the Borognika restaurant in downtown Budapest. You may think that Swallow (https://www.sozialmarie.org/en/projects/8595),  supporting family of detainees, Inclusive Kindergartens (https://www.sozialmarie.org/en/projects/8855),  a district desegregation programme for kindergartens and Feed the doctors (https://www.sozialmarie.org/en/projects/8788), gastro support for healthcare workers, have nothing in common. Surprise – in less than two hours the projects discovered multiple similarities and even developed future plans together. In recognition of Inclusive Kindergartens, a special project based on broad intersectional cooperation between the municipality, two NGOs and the leaders and staff of the kindergartens, we visited the 8th District Municipality’s Teachers' Day celebrations as well. We handed over the SozialMarie Prize to the kindergarten teachers to thank them for the extra efforts they make in addition to their day-to-day hard work to make the kindergartens, and thus the schools in the district, more inclusive places. We are all looking forward to more personal events and meetings in the future.

Joining our winners at the SozialMarie office in Vienna was definitely the highlight of 2022. We realised again how new opportunities can emerge when having an informal conversation over lunch. For example, we found out how Hobby Lobby’s experience with children's workshops could be used in the next neighbourhood event organised by Space and Place (“we speak”) and that the smart subtitle technology offered by uugot.it TV could even make a great addition to SozialMarie’s YouTube videos! The prizes were handed over by Wanda Moser-Heindl (founder of the Unruhe Foundation), Bettina Rauf (board member of the Unruhe Foundation) and Anna Misovicz and Fruzsina Herbert (SozialMarie) to this year’s winning projects from Austria: CHANGES for women, “We speak”, uugot.it TV, Hobby Lobby and Die Gesundheitsgreisslerei. The people behind the projects finally had the chance to meet each other personally and to exchange and discover synergies.

This year's winner and nominees have a lot in common – it is almost as if SozialMarie nominated them in pairs. Both the protective workshop (@Srednja strukovna škola Varaždin) and @Humana Nova are committed to sustainable textile production and recycling, while Knin Wall Newspaper (@Otvoreni likovni pogon) and Museum of Personal Stories (@Fade In) use art and storytelling to keep together communities that once pulsed with multi-ethnic vibrancy and solidarity. Last but not least, what would local communities, both on the dislocated islands and in the centre of Zagreb, do without @PokretOtoka and @zajednickiput – thank you, guys, for all your engagement and enthusiasm! We share pictures from two more inspiring gatherings with those both nominated and awarded for projects in Croatia.

After a long period of online meetings only, the two Slovak winning projects finally met in person! Slovensko.Digital (https://www.facebook.com/slovensko.digital ) and Impact Games (https://www.facebook.com/impactgames.eu IG: @impactgames.eu) received their awards and during the small awards event, it became clear that they were connected in another way too – both projects work in digital space and found many synergies, common topics, similar challenges and were able to exchange experiences. Innovations in digital space are receiving more and more attention, including from SozialMarie – no wonder Slovensko.Digital received the 1st prize. Many IT projects have been improved or stopped altogether thanks to the Red Flags project and state officers who are now more educated on what a good project should look like. Added to that, the reach and potential of the digital educational games produced by Impact Games, both in the Slovak context and internationally, is obvious. Digital innovations (whether state-led IT projects or digital education) have continued to improve in Slovakia over the years but there is still a journey ahead – both of the winning projects have many new ideas and an inspiring vision of what can be done. 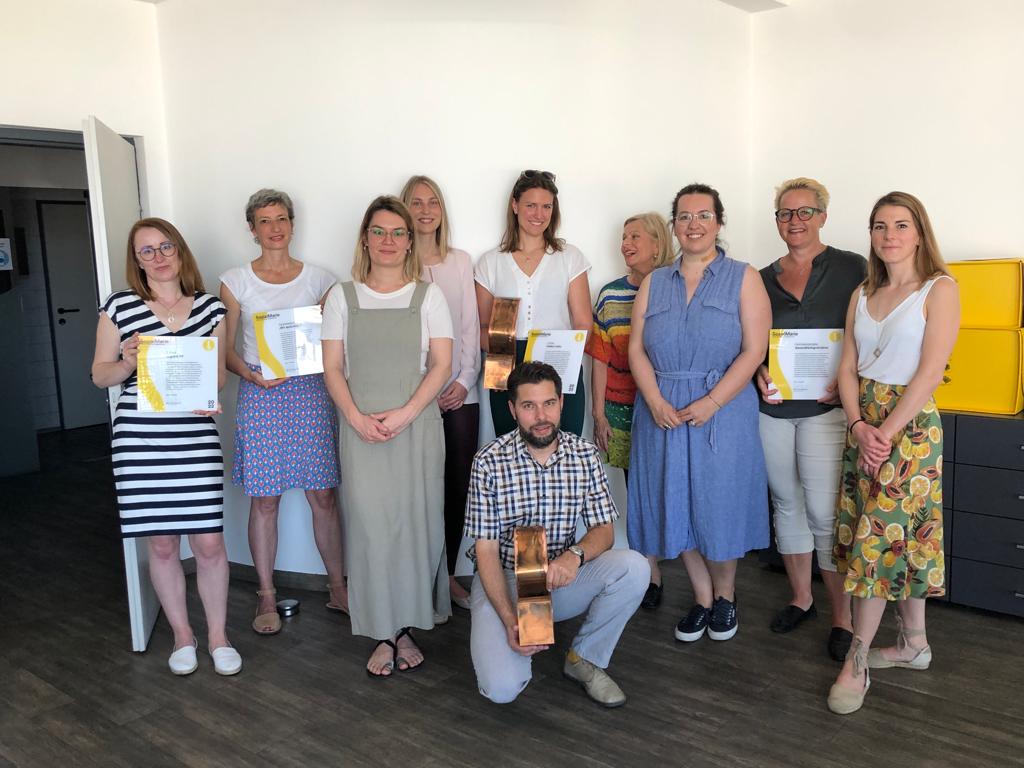 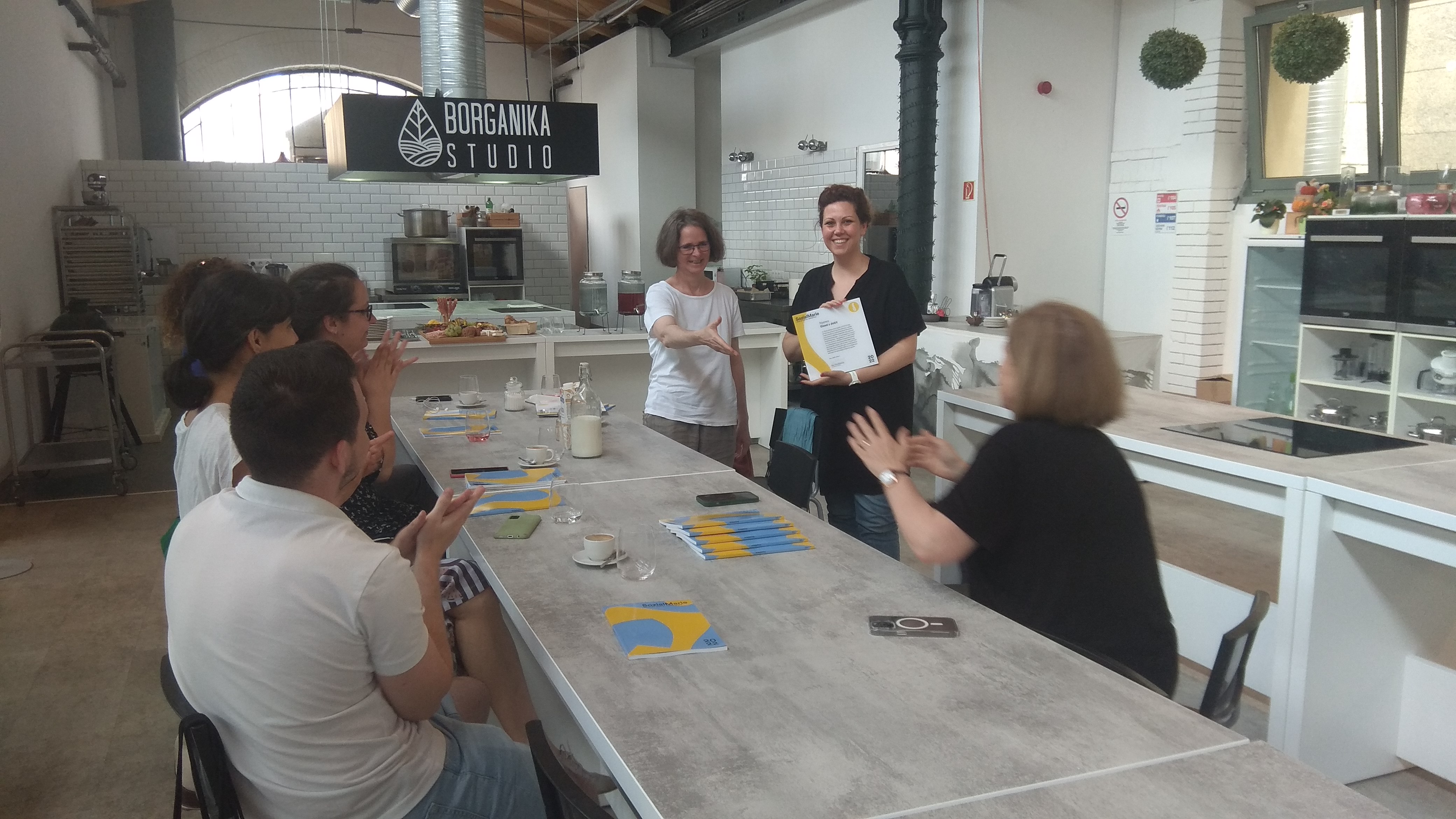 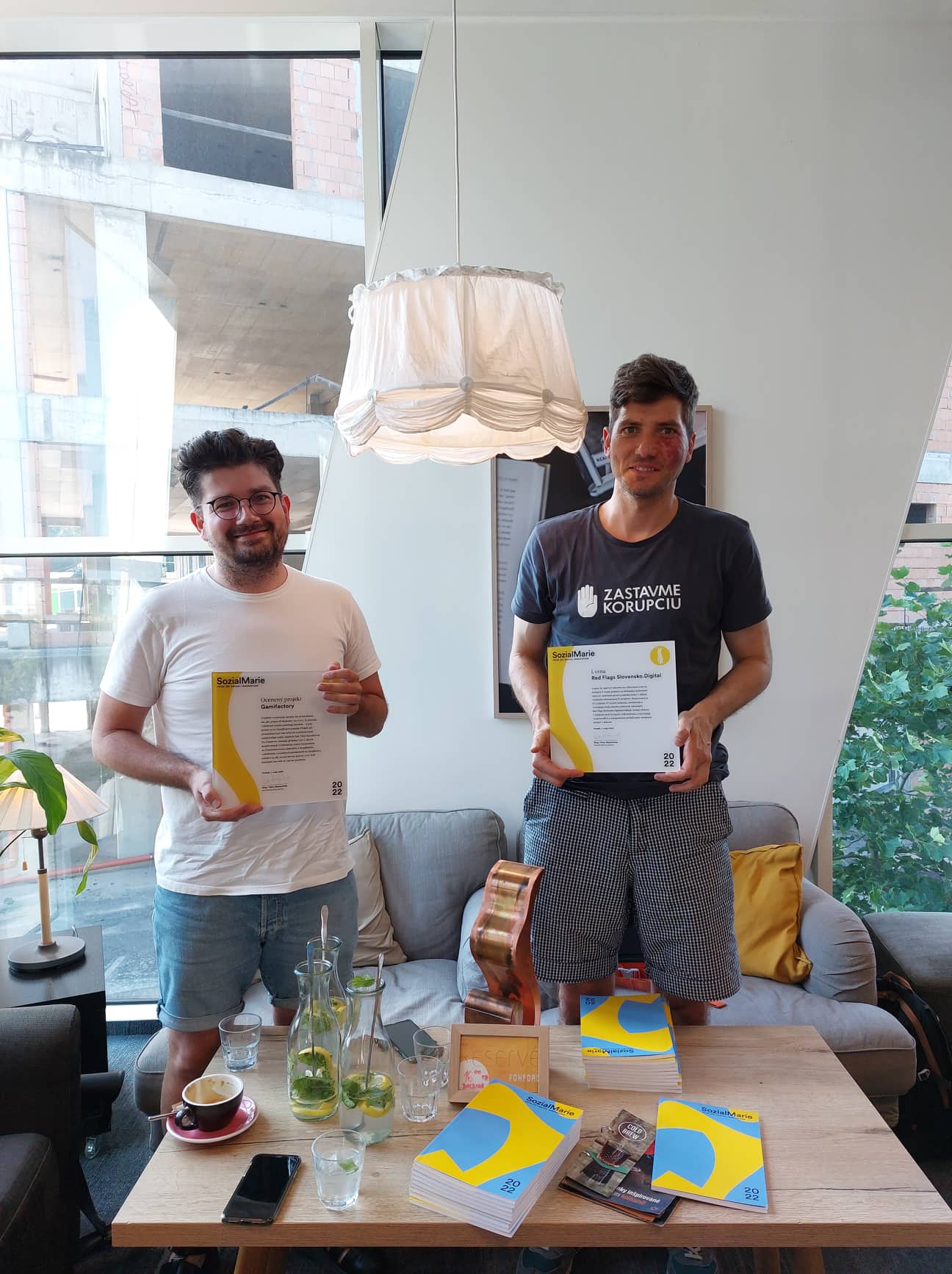 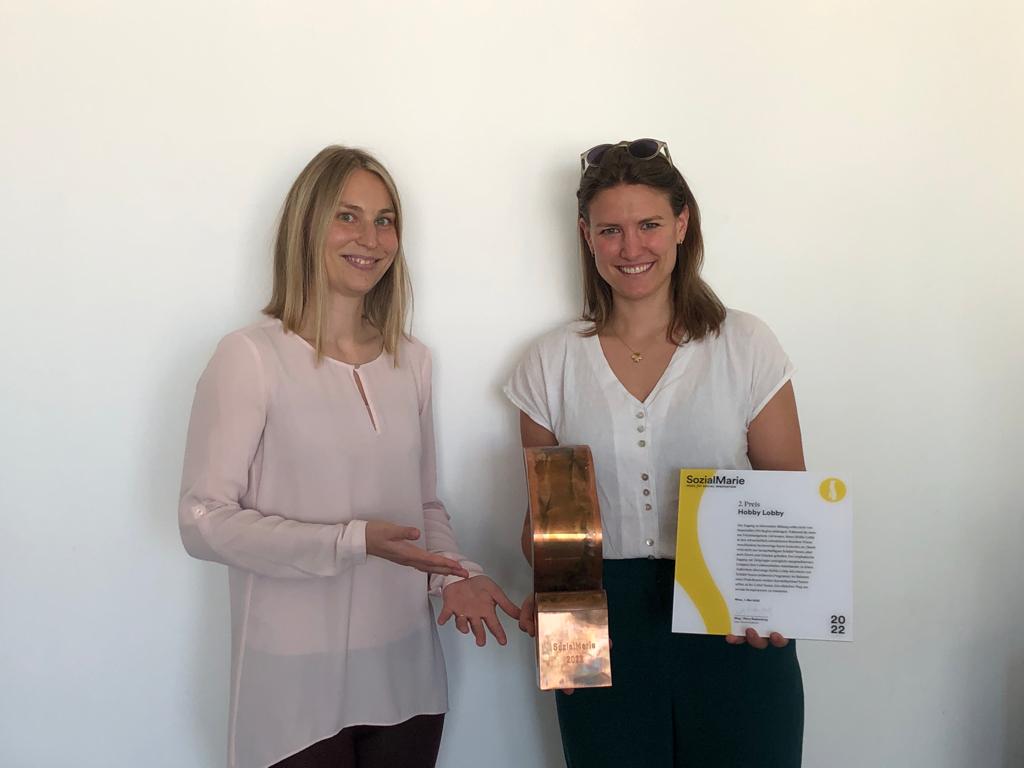 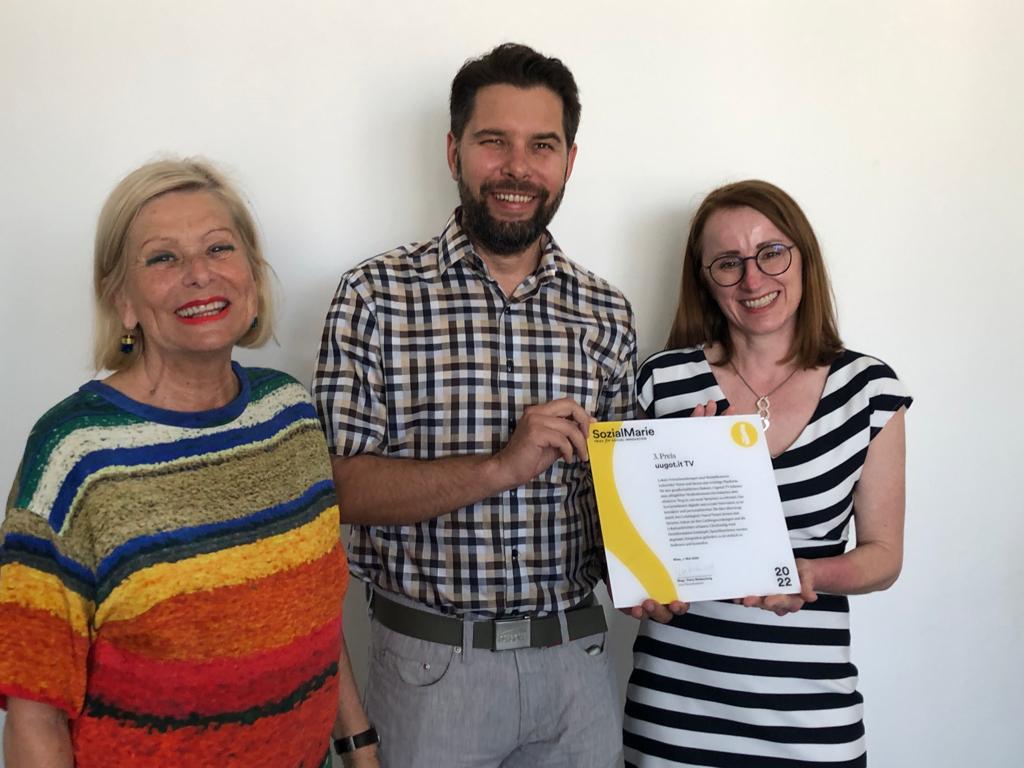 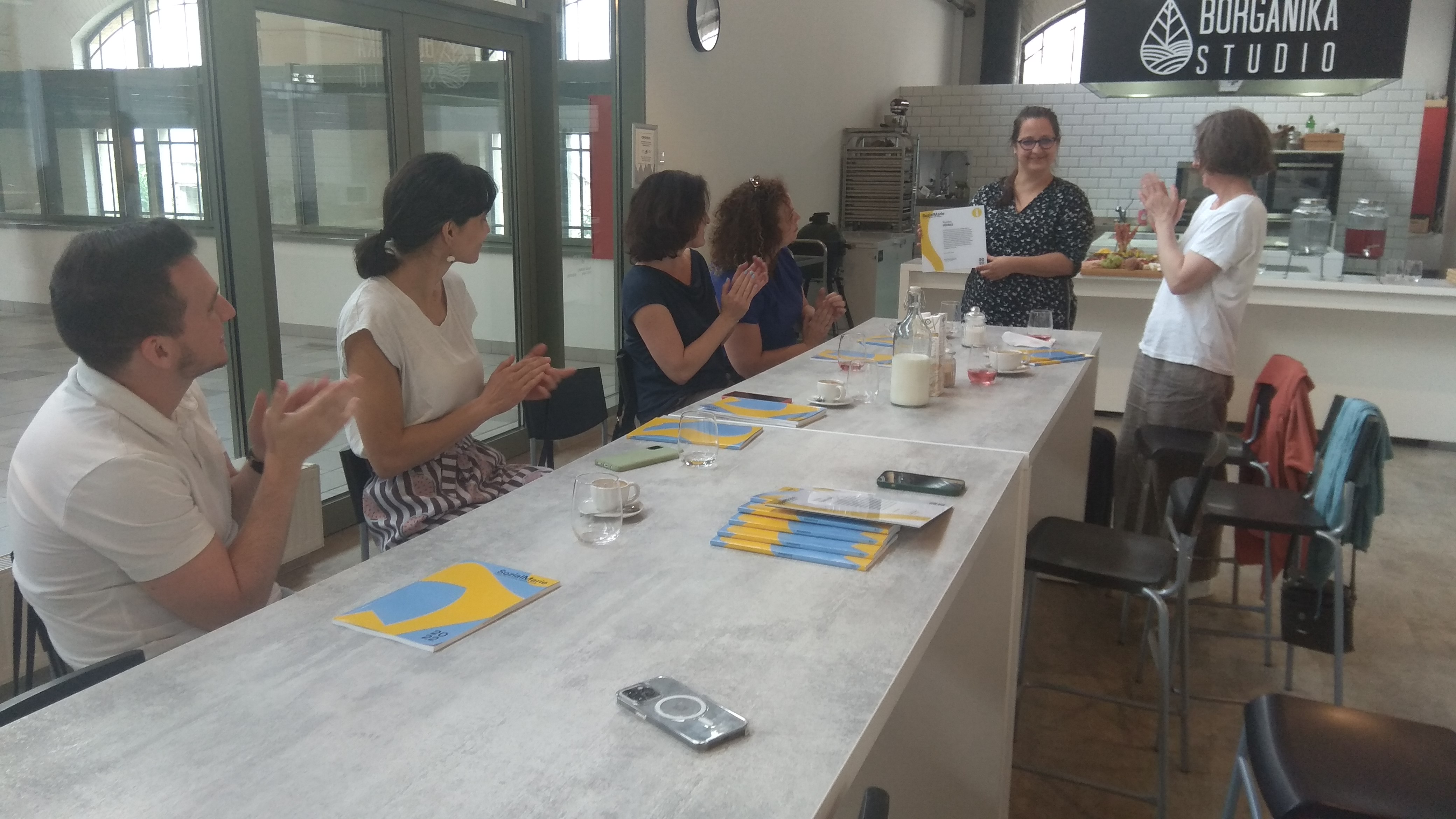 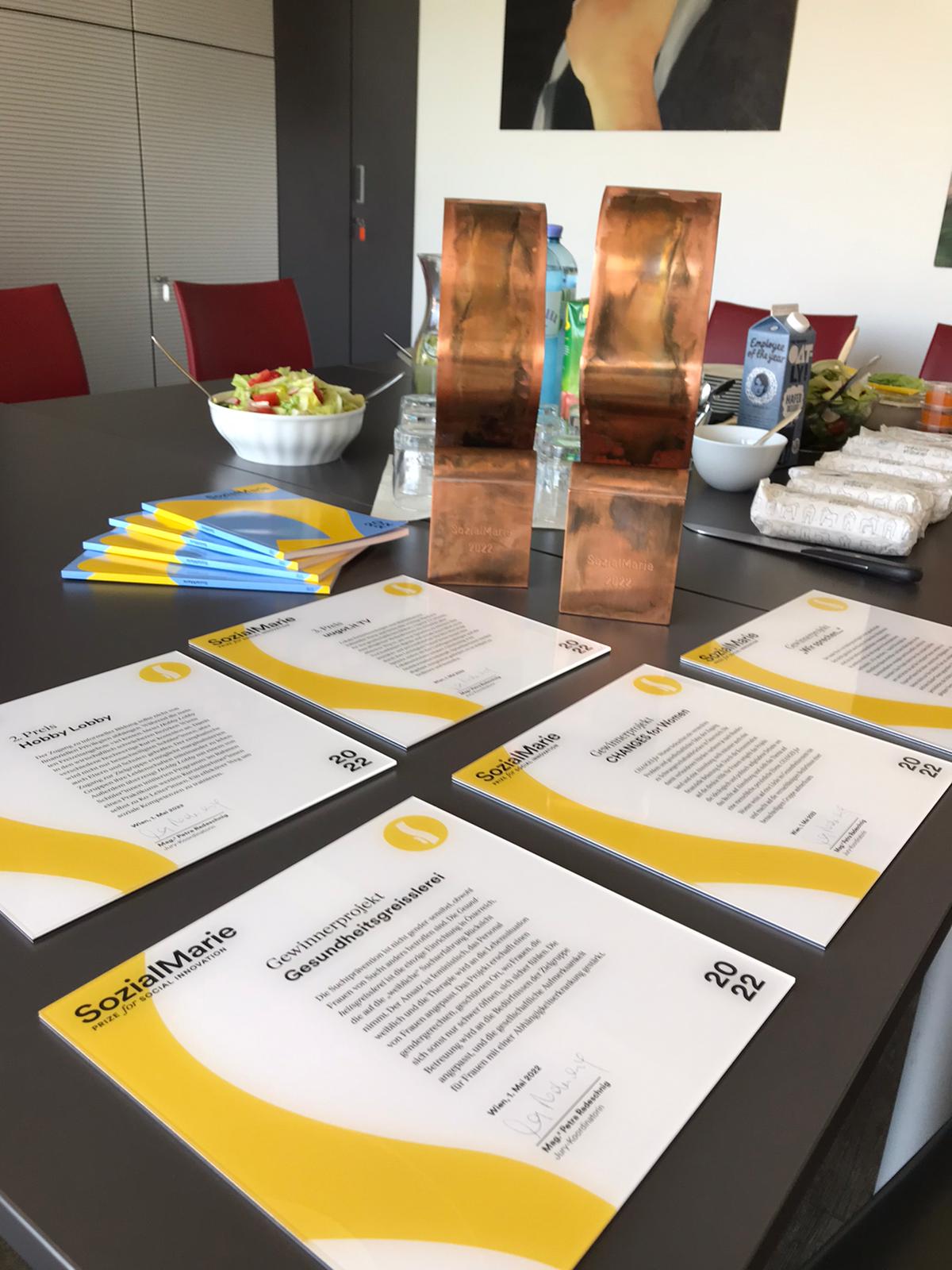